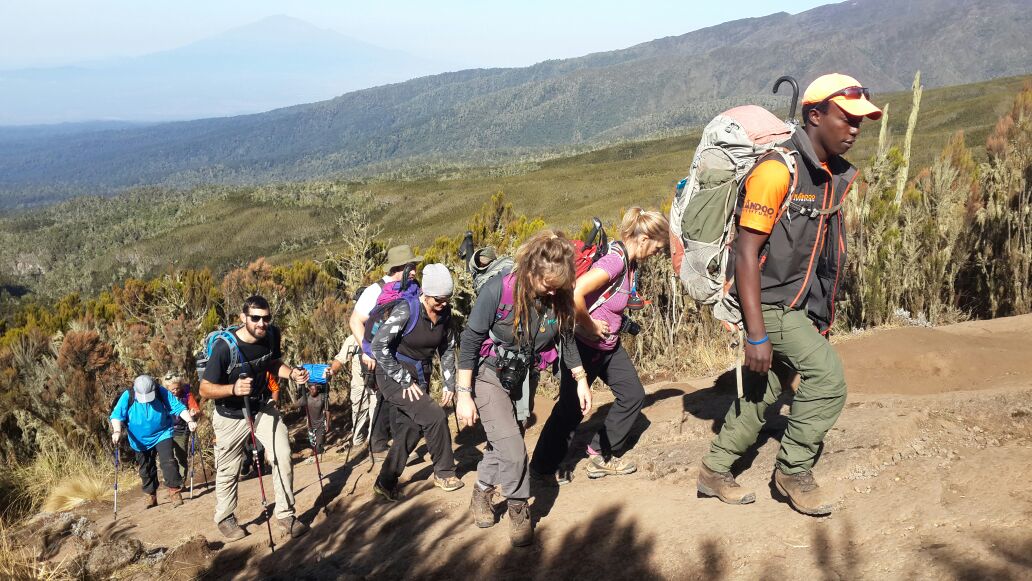 So after enjoying their first night on the mountain, day 2 of climbing is now underway for our adventurous Team Alpine. Today will see them trek from Machame camp to Shira 1 Camp.

After an energy filled breakfast they will start walking, leaving the rainforest behind and continue their ascent, crossing a small valley and up to a steep rocky ridge, covered with heath. The vegetation will grow more sparse and the paths will become dustier as they ascend. They will have rock and boulders to contend with as they near the famed Shira Plateau.

Tomorrow will be the most challenging day so far on the Machame Route, lets hope the team stay strong and push through to reach camp. Here is what Kandoo Adventures has to say about the route and what to expect………

The Machame route is one of our most highly recommended routes to climb Kilimanjaro as it offers great acclimatisation, allowing the climber to “walk high, sleep low”, and as a result enjoys one of the highest summit success rate of all the routes to climb Kilimanjaro. It goes by the nickname of “The Whiskey Route” although no whiskey is available!

The Machame route approaches from the southwest passing through Kilimanjaro’s five diverse climatic zones with stunning views to the west across the Shira Plateau where it joins the Lemosho/Shira route on day 3. It then continues on to the magnificent Lava Tower, followed by the Great Barranco Wall and Kilimanjaro’s Southern Icefield.

Some people are concerned about short scramble up the Great Barranco Wall, but this really is not that tricky and you will be helped by your guide every step of the way. One stride around a rock outcrop is the most precarious part you will experience. Thousands of climbers safely travel this route each year, let alone the Kilimanjaro porters carrying heavy loads.

Owing to its high success rate the Machame route can be busy, but we ensure we hit the trail early to avoid the crowds. We also ensure that our porter team arrive into the designated campsites early so that your tent will be set up and ready for your arrival. Together with a nice hot drink prepared by our team cook.

Although you can climb Kilimanjaro over 6 days via the Machame route we recommend taking 7 days. The reason for this is that it offers much better acclimatisation and allows the pre-summit day to be split into two which means that you have two shorter days trekking prior to your summit ascent. This really helps and has proved a great success and a more enjoyable way to climb Mount Kilimanjaro.